Two Slovak children were suspected of burning down a large gothic castle, Krasna Horka in eastern Slovakia when their experimentation with smoking went wrong, police said on Sunday. 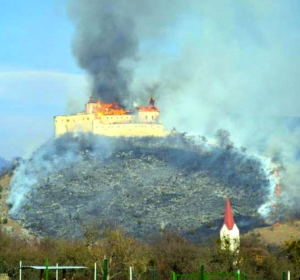 Police were investigating two boys on suspicion that they set grass at the foot of the Krasna Horka castle on fire on Saturday when they tried to light up cigarettes, said Jana Mesarova, police spokeswoman for the eastern Slovak region of Kosice. Children under the age of 15 cannot be prosecuted in Slovakia.


"A unit sent to the site found that two local boys aged 11 and 12 were trying to light up a cigarette and because of careless use of safety matches, they set grass at the castle hill on fire," Mesarova said.

The castle subsequently caught fire and emergency services deployed 84 firefighters to the scene.

The Slovak National Museum wrote on its Facebook page that damage to the castle was extensive but about 90 percent of historical collections were saved, including contemporary photographs of furnished castle premises from the turn of the 19th and 20th centuries, oil paintings and various ornaments.

"The castle's roof burned down completely, as well as the new exhibition in the gothic palace and the bell tower. Three bells melted," the museum said.

The castle, near the UNESCO-protected Domica Cave, dates back to the early 14th century.

Courtesy of Yahoonews
Posted by Freddie Miranda at 18:04