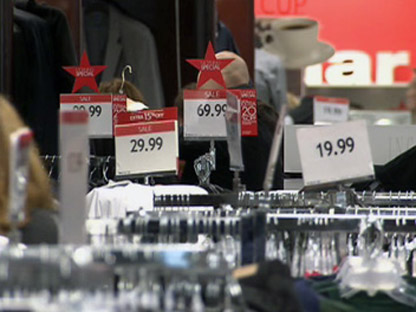 Canadian bargain hunters and communities within easy reach of the U.S. border are beginning a new chapter in their relationship with U.S. retailers with new rules on duty-free shopping that went into effect Friday.

The changes -- previously announced in this year's federal budget -- put increased pressure on Canadian retailers and other businesses that have long watched their customers lured Stateside by their rivals' relatively low prices.
In most cases, the increases to the duty-free levels are substantial.

Cross-border shoppers who could only declare $50 of purchased goods after an overnight trip are now able to bring $200 worth of merchandise back home.

Travel for less than 24 hours still has no personal exemptions.

"We want to make the travel experience less bureaucratic and less time consuming."

Oliver said the government estimates the changes will save Canadians about $13 million this year, which will increase to $17 million on an annual basis in 2013.

Stephen Fine, founder of online shopping resource crossbordershopping.ca, said would-be bargain-hunters are keen to take advantage of the new limits.
Shoppers had begun mobilizing to pressure the government into changing the personal exemption rules, he said, adding the 24-hour duty free limit was a frequent bone of contention.

Fine said the government's new regulations have addressed those grievances, but have failed to eliminate the main source of inconvenience, the lack of exemptions for 24 hour trips. Those rules are a sharp contrast to Americans who are entitled to $200 worth of exemptions when crossing the border from Canada.

"There's been a lot of disappointment about that from our audience because the majority of cross-border shoppers are same-day shoppers," Fine said, adding trips of less than 24 hours make up about half of all visits to the U.S.

The lack of a same-day exemption, Fine said, will almost offset the impact of the other rule changes on cross-border traffic.

Officials at some of the country's border crossings agreed the effects won't be easy to spot right away.

Matt Davison, spokesman for the Peace Bridge Authority that oversees the crossing from Fort Erie, Ont. into Buffalo, N.Y., said traffic is expected to remain steady despite the higher limits.

"Weekends are always busy times anyway," he said. "We don't expect to see anything out of the ordinary."

An employee at the duty free shop at Woodstock, N.B., who declined to provide her name, said store staff haven't taken any steps to prepare for an influx of cross-border dealfinders
.
Even if it is business as usual for those who man the gateways to the U.S., some companies based in border towns say the government's new regulations don't bode well for their survival.

Raising the duty free limits, he said, is a perfect way to take money away from Canadian business owners.

"We don't get the tax income as a country or a province. That's why I don't understand what the government is doing," Smith said. "Why would they take money out of their pockets, which of course is our pockets, by enhancing the ability to bring goods across the border?"

Local chambers of commerce across the country and the Retail Council of Canada said Friday that Ottawa should make immediate changes that would help them combat cross-border shopping.

They said Friday the federal government should immediately eliminate the tariffs charged on imported finished goods which, they say, add to the costs that Canadian retailers must deal with when they set consumer prices.

"The government's decision to increase duty exemptions on goods bought in the U.S. is salt in the wounds of retailers in border communities," Diane Brisebois, the Retail Council's president and CEO, said in a statement.

In his announcement, Oliver said the changes would affect a "very small percentage" of the domestic economy.

"We don't see it really having that negative an impact," he said.

"It's a question of being accommodating to travellers and having an equality between rules that apply to Americans and Canadians."

Finance Minister Jim Flaherty has previously responded to similar charges by saying the exemptions had not been adjusted for inflation in decades, adding the higher limits would also free up customs officials to focus on security issues.

But BMO Capital Markets economist Douglas Porter suggested in a recent report that the new rules would lead to a spike in the number of cross-border shoppers, which would in turn accelerate the bleeding from a retail sector that already loses between five and 10 per cent of its business to U.S.-based rivals.

"Even at a conservative estimate of five per cent, we are talking over $20 billion a year," Porter said in his report. "If correct, that represents a real drain on domestic retail sales, employment and government revenues -- a drain that looks (likely) to deepen."

Posted by Freddie Miranda at 21:24