Most likely, you have never heard of Armenia, and if you have, you probably have no clue where it could be situated.

Armenia is a tiny country that lies in the Caucasus region. Its mighty mountains form the border between Europe and Asia.  Before I went to Armenia, many of my friends were asking "Why on earth are you going to Armenia?" I hadn't know much about this country myself, however, I really wanted to travel to some unknown, hidden destination that no one knows anything about. I wanted to be able to discover it myself. And it was the best decision I could have taken.

I will present the most interesting places to see in Armenia in the hope that it might inspire you to choose some different destinations for your next vacation, than, for example, overcrowded by tourists ~ France, Italy or Spain.

Things you can't miss in Armenia
1.  Khor Virap Monastery with the Mount Ararat in the background 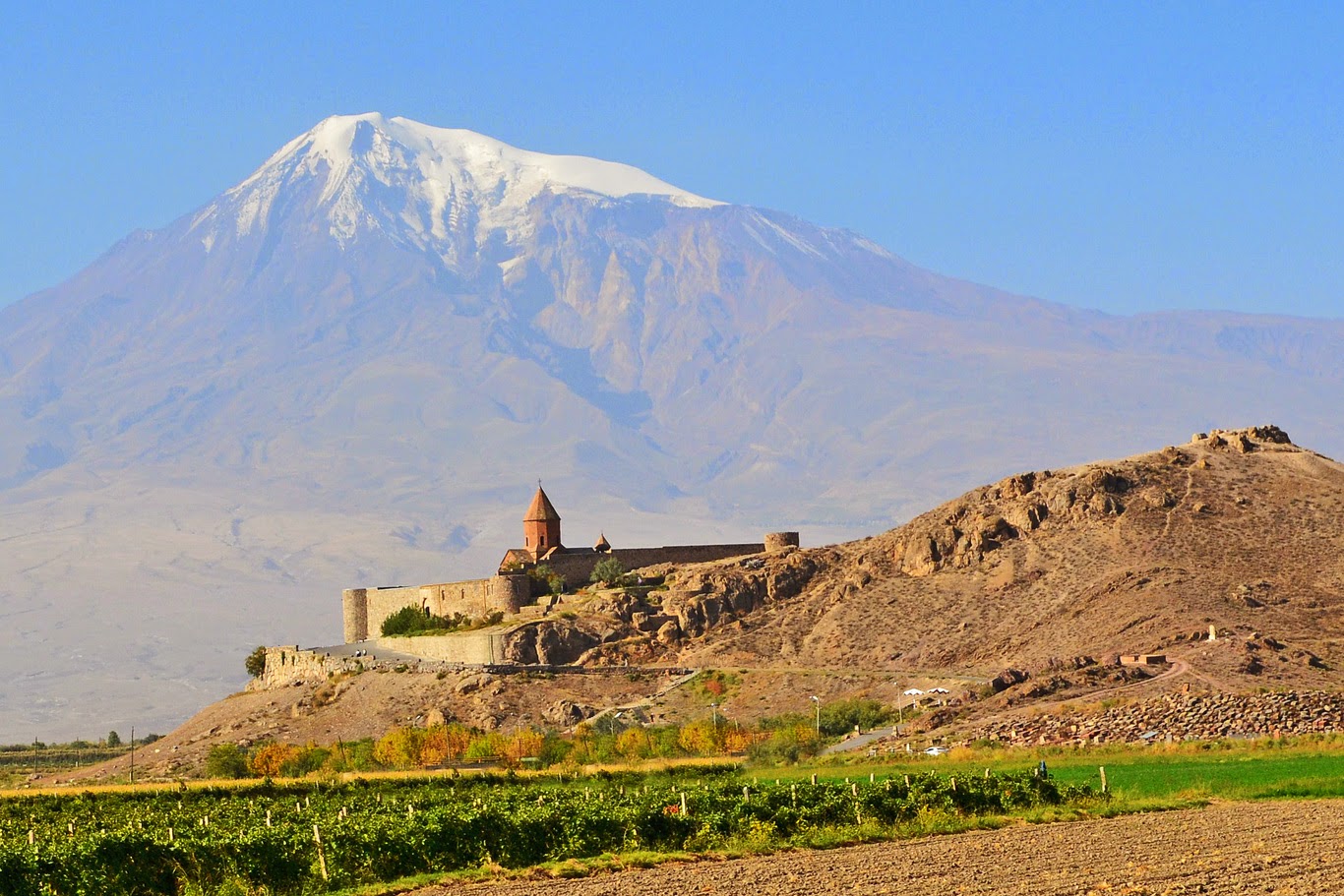 Armenian land is a territory of great historical significance, it even predates the Roman Civilization ~ Caucasus region is the place where wine is believed to have originated from. You probably know the biblical Mount Ararat ~ the mountain on which Noah's Ark landed after the great flood. You can admire this most beautiful, unforgettable view in Armenia in front of Kvor Virap Monastery ~ where Gregory the Illuminator was kept as a prisoner in the dark dungeons for 13 years.
2. - The 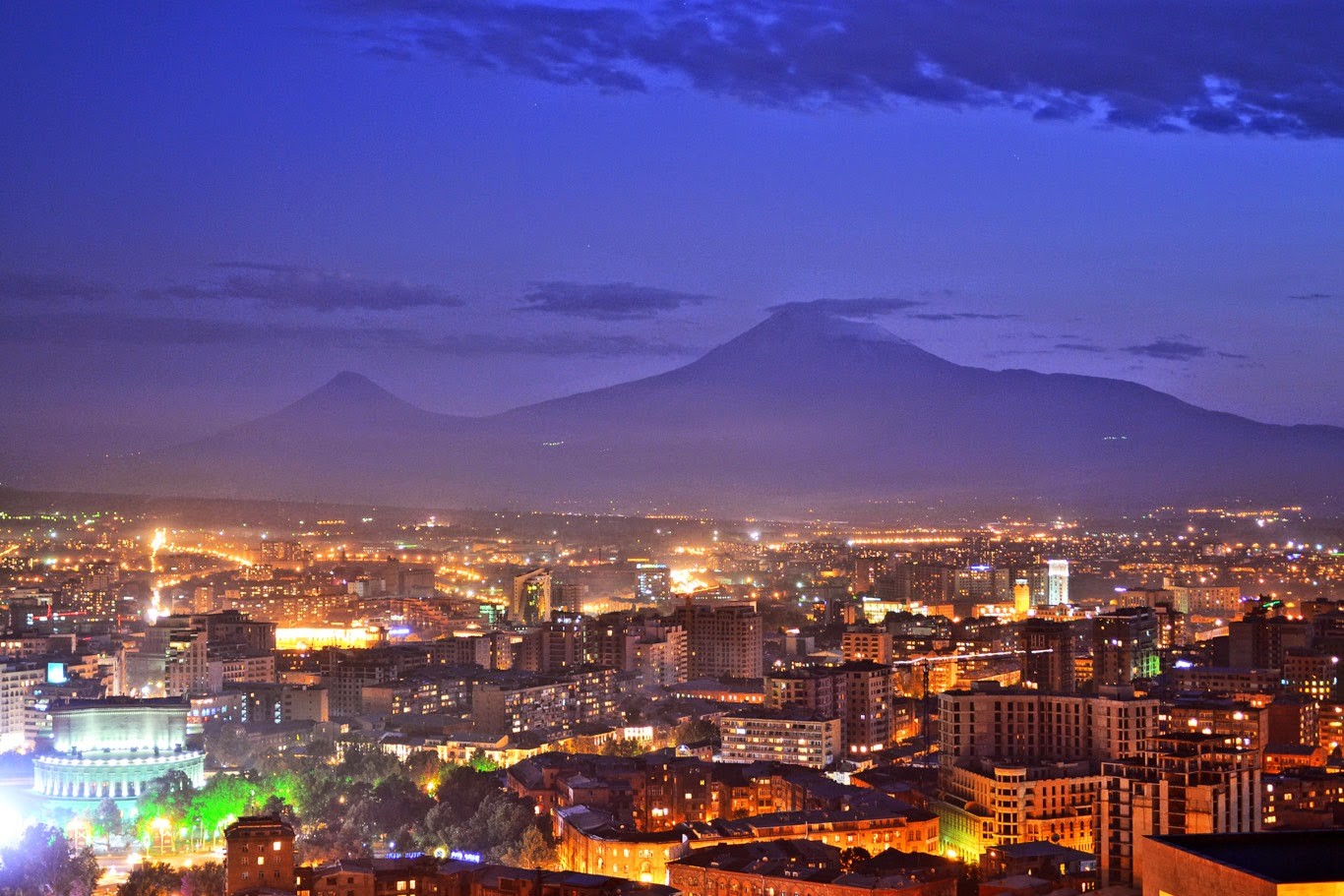 Of course, visiting Armenia, you will end up in the country's capital at some point of your journey. You will surely be enchanted, especially during the evenings when the Pink City (the nickname comes from the colour of stone used in construction) comes to life. Walk along the wide alleys, admire breath-taking dancing fountain and laser shows in the main square and climb the cascades to see another magnificent view of the city and Mount Ararat. 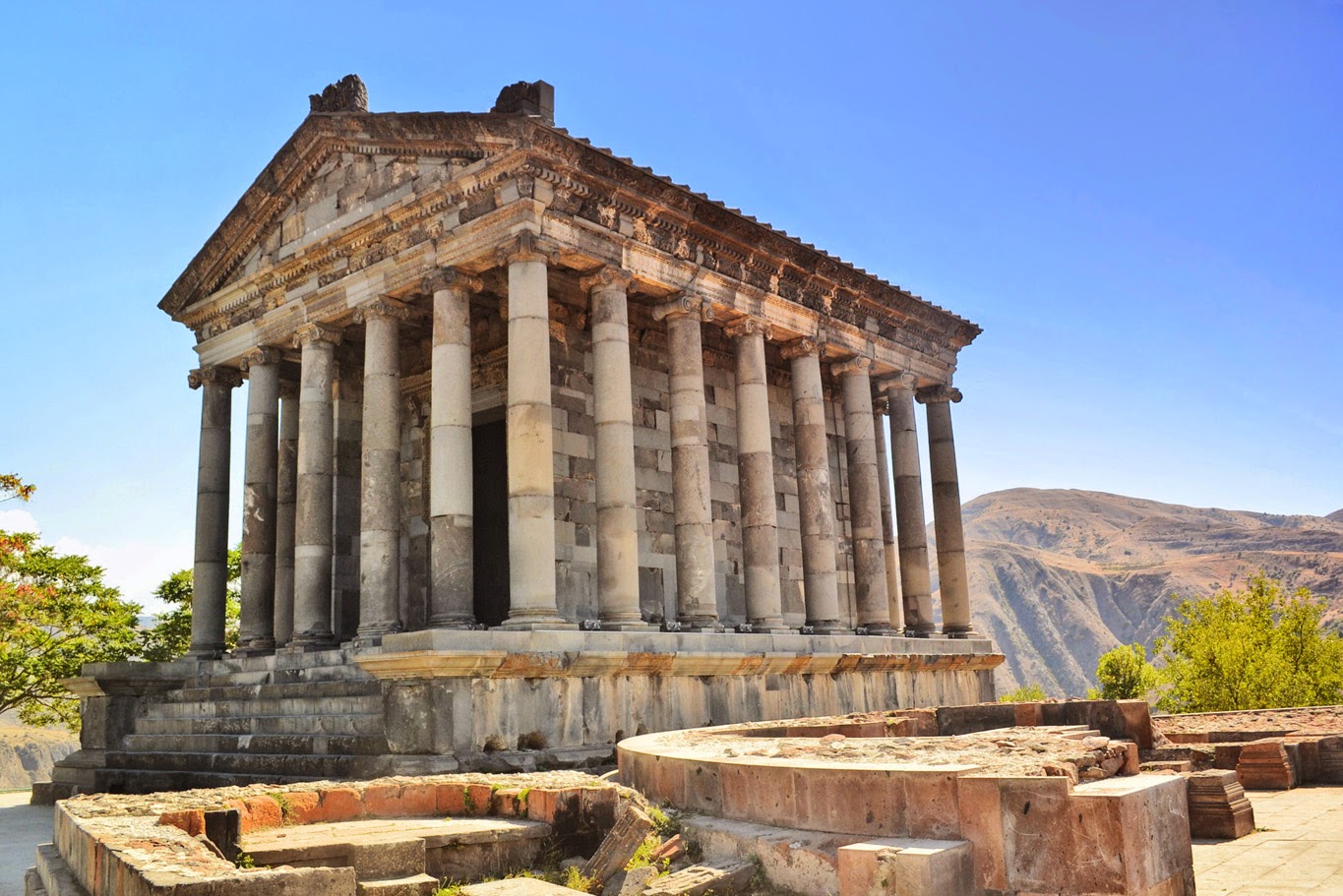 Garni Temple, only 30 kilometres from Yerevan, surrounded by stunning gorges, canyons and ravines is the only Roman style temple in the region. It dates back to the 1st century AD. On the site, there are also ruins of the bath complex, royal palace and church. The location of the temple, among outstanding natural scenery will make you feel as if you travelled back in time to the Roman Empire. 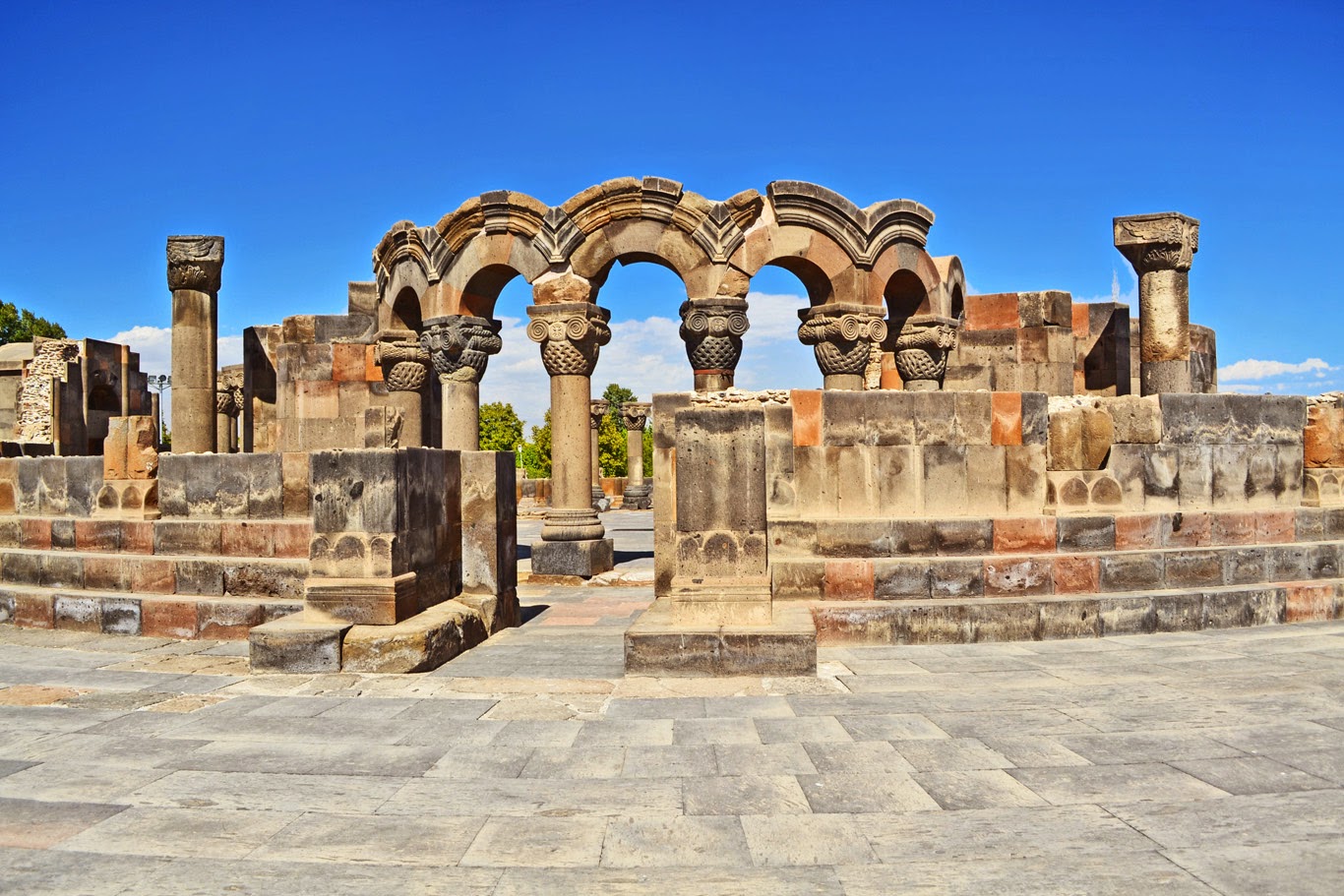 Zvartnots Cathedral, also not far from Yerevan, is an astonishing example of architecture not seen anywhere else. It had been erected in the 4th century AD but unfortunately was destroyed three centuries later.  Now, the circular foundations are still excavated by archaeologists and the ruins can give you a glimpse of its grandeur. 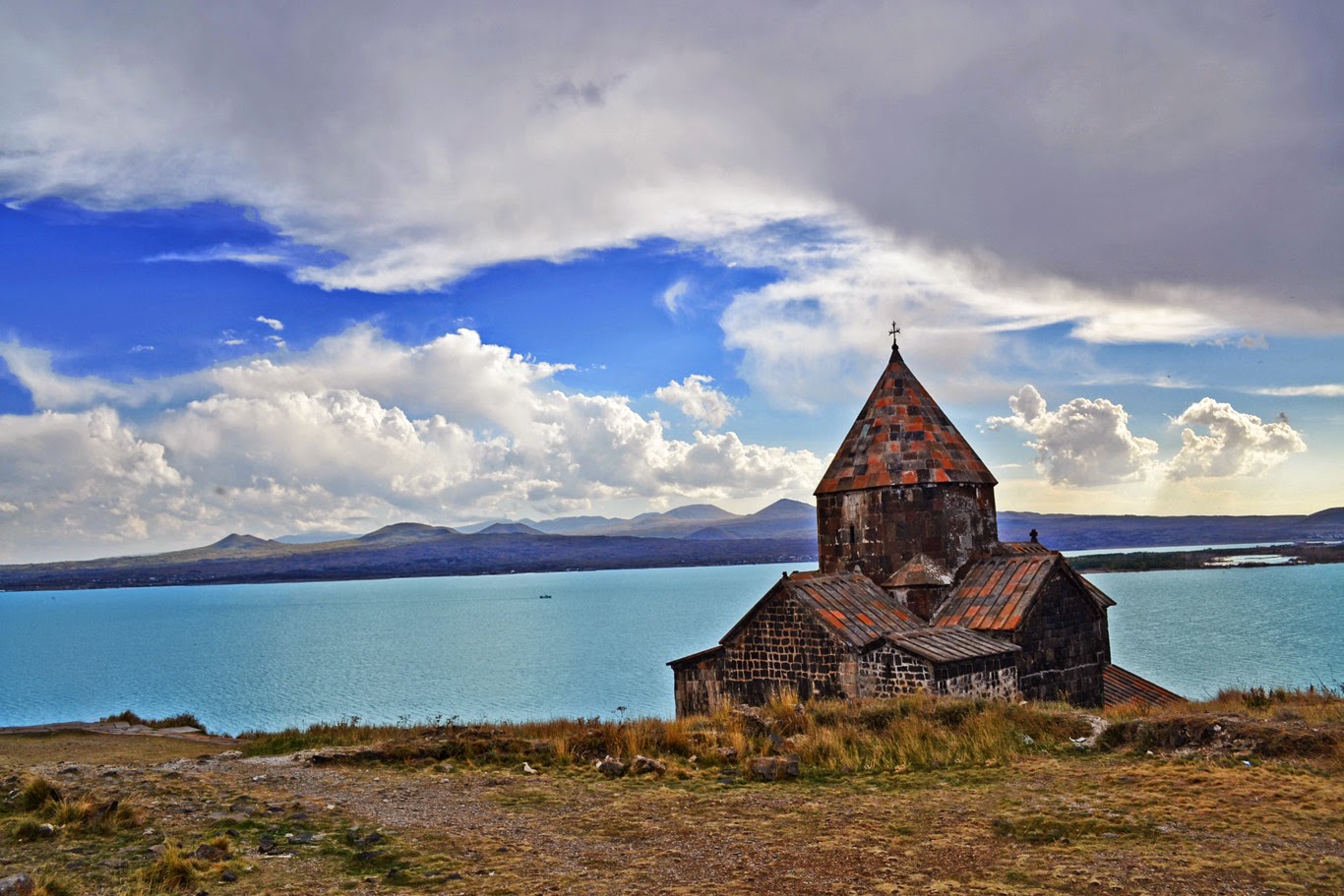 Lake Sevan, the largest in Caucasus is also one of the highest ~ it lies at the altitude of 1900 metres. The climate is considerably cooler than anywhere else in Armenia and it's a nice relief from the scorching summer heat in Yerevan. At the lake, there is a beautiful Sevanavank Monastery ~ another Armenian's architectural gem. 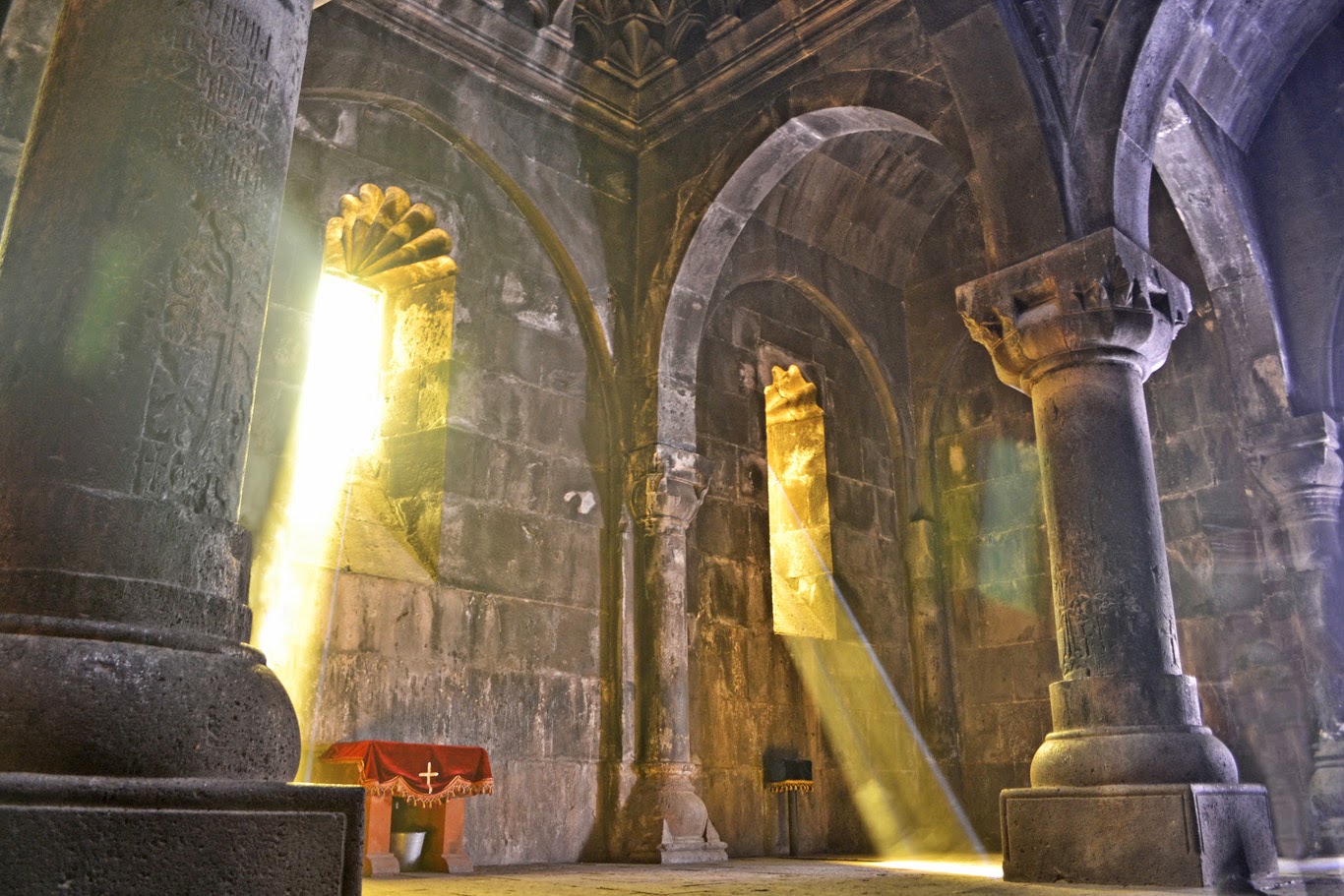 Geghard means "a spear" and it is believed that the real spear that had pierced Jesus' heart was held there. What is different about this monastery is the fact that only a small part of its was actually built. The rest was carved of the sandstone cliff wall. One of the most mysterious and magnificent sites in Armenia.

Tomasz Lisowski s a passionate traveller and blogger who explore mainly forgotten, hidden and unknown destinations in the world, usually omitted by bloggers and travellers. Visit his blog,  Adventurous Travels, and discover the unknown parts of our beautiful world.

Posted by Freddie Miranda at 11:00