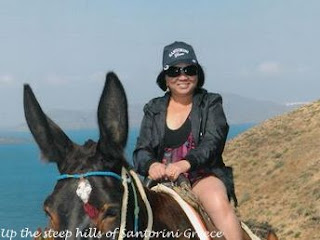 Holidaying without breaking the bank!

Marie believes that travelling and spending quality time with her loved ones make for a closer relationship with her kids, no matter what.  She said, often times, they are the only ones you can rely on through thick and thin.  "Be flexible when you travel, make the most of your time in a foreign place," she added.

Marie has travelled to a considerable number of countries in Europe, Middle East, and Asia.  She has been to Italy, Greece, UK, Spain, Portugal, Croatia, Netherlands, Ireland, United States of America, Canada, United Arab Emirates, South Korea, Japan, Singapore, People's Republic of China, Indonesia, Vanuatu, Fiji, New Caledonia, New Zealand, Philippines, Hong kong, and Taiwan.  She hopes to visit in the future countries like, Norway, Sweden, Iceland, and other Scandinavian countries, and the Galapagos Islands.
As an author, she is completing a manuscript which will be used to publish a book dedicated to her fellow global Filipinos and OFWs, who are the inspiration for her book on modern and classic Philippine cuisine.   She explains further, Philippine dishes are said to be unhealthy, unappealing, among many negative criticisms.  She will debunk this belief and show the world our cuisine can be at par with international cuisines or even greater in terms of flavour and variety.


"Our regions and islands are blessed with natural resources which are perfect ingredients for a most satisfying yet delectable meals," she continues.  Marie has almost forty years experience in Philippine cuisine and as a traveller sailing on luxury cruise ships sampling dishes all over the world which most often have been actually prepared by who else? Filipinos of course!

She hopes that readers of this blog will continue supporting her on the launching of her first book.

Marie is born in the Philippines and has been living in Sydney with her family.  Here is her story.......(An update: Marie has since moved from Sydney to Port Huon in Tasmania, a place she now call home. This writer will request Marie to write about her new found Paradise, Tasmania). Stay tuned!

Sydney, Australia is a haven of bliss for my family of four ~ myself, my almost perfect husband David and my two sons Thomas and Lester.  I invite you to join me as I share with you the best places and wonderful experiences that await you in your visit to this "lucky country."

Indeed, Australia has even weathered the global financial crisis gripping most of the world for the past couple of years now!  Why is that so?  Well, Aussies just think differently in my view.

Anyway, let's start with our locale: My family and I live in tranquil settings amidst wide open spaces and yet near amenities ~ shopping centre, banks, dining options, leisure centre, etc.  On any given day, here, we don't need to use our car as we are 1000 metres from the nearest shopping area where I can get fresh fruits and vegetables and other everyday items.  The famous Parklea Markets are also just nearby.  The renowned Blacktown Olympic Sports Centre is also a stone's throw away where local sports competitions are held.  The Leisure Centre with its own modern library where you can borrow more than 10 books, CDs, magazines are also with walking distance.  Also beside it is the Aquatic Centre with its indoor wave pools, jacuzzis, sauna, gym, and indoor basketball courts. Yet, there are parks with lovely gardens, water features, hundred year old trees that give you a refreshing retreat from the hustle and bustle of the city and many more places to unwind at the end of a stressful day.

When we have guests overseas we take them first to the world famous Sydney icons ~ the superb Sydney Opera House, the Harbour Bridge, the Maritime Museum, Powerhouse Museum among many places of interest in the city of Sydney which is less than an hour from us!

But our favourite places to take them is at the awesome Blue Mountains where you can find the legendary Three Sisters and around this you will find a huge National Park filled with amazing flora and fauna, among them the Wollemi Pine said to have co-existed with the dinosaurs during pre-historic times!  Go bushwalking and experience the beauty that is the Blue Mountains.  Ride the cable car and walk literally among the tall gum trees and other old-age trees as you enjoy the verdant valleys and fresh air!  Go spelunking at Jenolan Caves where pioneers discovered more natural treasures showing the geographical formations thousands of years ago undergone by this spectacular nation.  You can also go apple picking at Bilpin, part of the Blue Mtns National Park, and sample freshly made products like apple pies, honey, preserved fruits, jams and jellies of all kinds, among others.
Last but not the least, you will find anywhere you go in Australia particularly Sydney that the best thing about this region is the people ~ they make Australia what it is today too ~ who are they? Filipinos, around 20,000 of them live near our area alone, and in New South Wales, just one state of Australia, there are about 200,000 or so Filipino-born Aussies or those with Philippine ancestry.  Aside from them we have Chinese, Indians, Vietnamese, Japanese, Europeans, Australians of course with New Zealanders, English and other western heritage.  Hence, there is a multicultural community that is uniquely Australian and that's why we have the best the world has to offer!  So come and visit our Sydney, so we can personally tell you. "G'day mates!!!"

* * * * *
Are you a traveller who would like to share your travel story with our blog and our readers?  Then, I'd love to hear from you!  Please email me at fromatravellersdesk@gmail.com

Posted by Freddie Miranda at 22:41