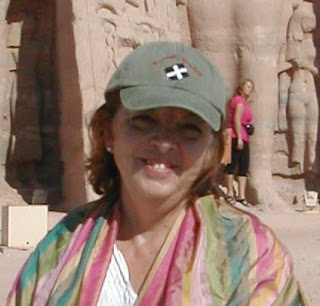 "Try to meet some natives"

Title: A Whiff of Cologne

Other countries visited:  Most of the countries surrounding Germany - Belgium, the Netherlands, France, Austria, Switzerland, Czech Republic.  Luxembourg, Spain, Portugal, Hungary, Italy, Greece, Israel, Egypt, Australia, three hours in the Bangkok airport, and three hours in the Kuala Lumpur airport.  Of course, I've been to Canada - more times than I can count.  I grew up in Minnesota!

I'd like to give you a little whiff of Cologne.  Did you know that the fragrance is named after the city I live in?  The inventor of what we call Eau de Cologne was Giovanni Maria Farina (1684-1766).  As you can see, his name is Italian.  His factory still exists, and is the oldest perfume manufacturer that still exists.  Today it is a perfume museum, and I often take visitors there - they have tours in English.

Farina was, like me, an "Imi" - what the people of Cologne call - not an immigrant, but an "imitation" -  someone from outside of Cologne who comes here to live and imitate the Cologne lifestyle.  As you can see, the Kölner believe that only the natives can get it right. They are very proud of their lifestyle.

In the days of Farina, it was hard to immigrate to Cologne.  You had to be Catholic, and you had to have income and a trade useful to the city.  I'm not Catholic, but I do have a trade - the English language, and I make money for speaking it.

I do not imitate what many people call a Kölner lifestyle, but I know many who live and love it. Some of them are even my friends.  They drink a kind of beer called "Kölsch".  I must say, I do like Kölsch.  Then, they speak a language called Kölsch.  I can't speak it, but I do have a postcard of famous Kölsch expressions hanging on my fridge.  My favorite is:  "Et es, wie et es." In German, that is, "Es ist, wie es ist."  It sounds very profound when you translate it into English:  "It is as it is."  What the people mean is, Things are as they are.  Don't get all worked up about it, since you can't change it anyway.  And I think there is a lot of wisdom in that.  Kölner drink a lot of Kölsch so that they won't get all worked up about it.  And they do manage to remain pretty easy-going, most of the time.  They have the reputation of being the most light-hearted people in all of Germany, drunk or not.  There is more beer drunk in Cologne per capita than in any other German city, thanks to Karneval.  During Karneval (same holiday as that in New Orleans and Rio de Janeiro), Cologne doubles in size, becoming a city of at least 2 million.  You see people dressed in silly costumes like clowns, pigs, jailbirds, or any other conceivable thing, walking down the streets, singing nonsense songs that are only sung in Cologne.  Here you can see an example of this.

I don't like Karneval because of all the rowdy drunkenness, and I can't get into the silliness. My son tells me, though,  that if you drink a lot of Kölsch, it can be a lot of fun, hopping from crowded brewery to brewery, joining arms with strangers who become brothers for a couple of hours, singing along to the music.  There are more brew houses in Cologne than anywhere else in Germany, and you can always strike up a conversation with somebody there, even when Karneval isn't being celebrated.

A lot of Kölner, other "imis" and I try to escape during Karneval, fleeing to the Alps for a ski trip, or flying to the Canary Islands for sun and sand.  I usually stay home and go for a walk in the woods, or hole up at home, cooking gourmet meals with my husband, dining in the dining/living room, and then watching movies I've downloaded from the internet.  But sometimes we use the occasion to travel to some nearby country.  Belgium and the Netherlands are just an hour's drive away.  Paris is a five-hour drive away.

Much as I love being able to travel just about anywhere in Europe easily from Cologne, I love coming back to the city, just like the natives.  I always look for the spires of the "Dom", whether flying or driving back.  I love the "Dom" - Germany and northern Europe's biggest cathedral.  It is the most popular tourist attraction in all of Germany.  I've been in there many times - on a tour, going to a church service, taking visitors there.  Every time I ride the tram into Cologne, I try to get a seat next to the cathedral side, just so I can see it again.  It looks so majestic, towering alongside the Rhine.

There's lots I love about this city.  It's very cultured.  There are lots of museums.  You can go to really good concerts here, in any music style - classic, jazz, or rock.  It's great for hiking and bike riding.  There are beautiful forests in and around Cologne.  I can get together with fellow Americans any time I want through the American International Women's Club.  I love to eat good food - I am a foodie, and in Cologne there are wonderful restaurants of all kinds. Just outside of Cologne, in Bergisch Gladbach, where I teach and used to live, there are more Michelin star restaurants than anywhere else in Germany.  My husband and I ate once at Schloss Lerbach (http://www.schlosshotel-lerbach.com/en.html), and experienced perfection.  The food there is prepared in ways I could never, ever come close to replicating, and the whole thing is a fantastic aesthetic adventure.  It felt like entering something holy, like heaven, being there.  This, of course, is the epitome of fine taste.  But that's another thing I like about living in Europe - there is so much elegant taste, so much of what is solid, old, time-tested tradition.  Life is a bit slower here.

I love walking on the cobblestoned streets.  There is a lot of the old in Cologne.  Most of it has been restored - 90% of the city was destroyed in World War II, but there it is again.  The ancient survives here.  Cologne has been a city ever since the Romans first came here 2,000 years ago.  Now that is old!

But not stuffy.  Cologne is never stuffy - it's too dedicated to silliness to ever be stuffy. Comfortable, old, a bit dirty, comforting, yet inspiring.  People don't beat each up here over ideological differences here.  It is the most tolerant place I know.

I like to travel by bike whenever I can, and there are good bike trails, even along the Rhine.  The weather is usually pretty mild, but it does rain a fair amount here.  Still, the minute the sun comes out, the people flock to the outdoor cafés and beer gardens.

I like to shop at the farmer's markets - there are many in and around Cologne.  I also buy my meat from an organic farmer near Cologne.  We get eggs and homemade pasta delivered to our house.  We go walking with our dog in the fields - five minutes' walk from our house, and yet we live within the Cologne city limits!

In my own blog, I focus on my thoughts and experiences of being a pilgrim, someone on a journey through life.  In one respect, you could say I simply ended up here in Cologne.  I came here because someone offered me a free trip if I'd watch her son for a couple of months.  It sounded great - I wanted a break from my job in New York City.  I fell in love with Germany, and then with my husband.  I went from infatuation to disappointment.  Now I would say I have a mature love for the place I live in.  I see its strengths and weaknesses.  I don't try to run away anymore when life is hard.  This is the place my journey has taken me, at least for now.  And it's a place you can settle down in, as well as pass through on a summer's day.

* Cologne Cakes~ One of the lovely cakes you can buy in Cologne bakeries.  This one with spires of the Cologne cathedral! 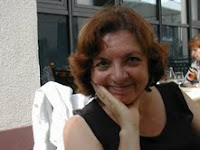 I've written a book about Cologne, also called A Whiff of Cologne.  At the moment it's in my computer, but I plan to self-publish it.  If you like what you've read about Cologne and want to read more now, send me an email and I'll send you the manuscript.

* * * * *
Are you a traveller who would like to share your travel story with our blog and our readers?  Then, I'd love to hear from you!
Please email me at fromatravellersdesk@gmail.com

Posted by Freddie Miranda at 10:19