The Beasts of Boca de Guama

Deep in the southwest of Cuba, near the Peninsula de Zapata, lays Boca de Guama, a tourist centre that is home to thousands of crocodiles. The crocodile farm is approximately 120 kilometres from Varadero, Cuba and is suggested to take less than 2 hours to travel there. This would be true if taking a tour bus excursion but driving by rental car is quite a challenge. Navigating road maps and coordinating them with dilapidated road signs means a 2-hour drive turns into 3 hours. Asking locals for directions is difficult due to the language barrier but it adds to the excitement and unknown that comes along with travelling to foreign countries. 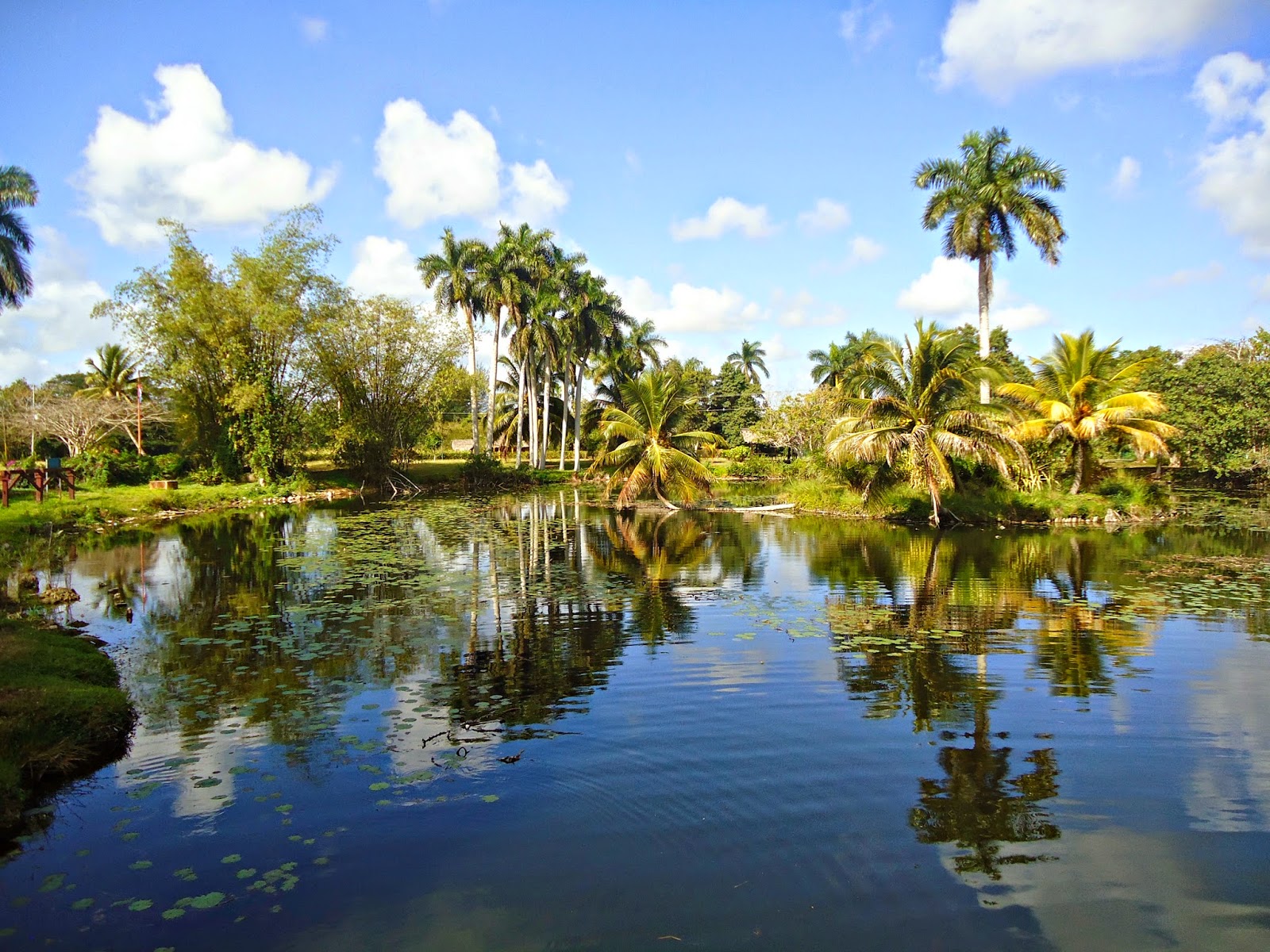 We pull into the parking lot at Boca de Guama and are immediately hit with the stifling heat. It's just before noon and the sun is hot and air is humid, making beads of sweat break out along my forehead. The place appears to be deserted other than a few employees milling about in the shade. But the experience will be anything but desolate.


Along the pathway, we stop to visit turtles, iguanas and tree rats; a delight for my young daughter who is now chasing chickens around on the grass. We wonder where the crocodiles are and make jokes about them jumping out of the swamps that surrounds us. It's peaceful and beautiful with palm trees littered here and there, the river and mangroves to our right and up ahead... a sign indicating the entrance to the crocodile farm.

We gush over the baby crocodiles in pens; they lazily bake themselves in the sun while watching us with beady eyes. A man approaches and asks us if we would like to hold a crocodile. YES... of course. I enter a pen wondering how big it's going to be and how safe this really is. The man brings out a crocodile about 3 feet long that has its mouth tied shut with twine. I almost feel bad for the little guy but I can't pass up this opportunity. The man gives some instructions on how and where to hold the reptile and the next thing I know, the small crocodile is draped over my shoulders. He is surprisingly cool to the touch and his under-belly is smooth as silk. I smile for the cameras. Now it was my daughters turn...she squealed with happiness and insisted that we take one home. 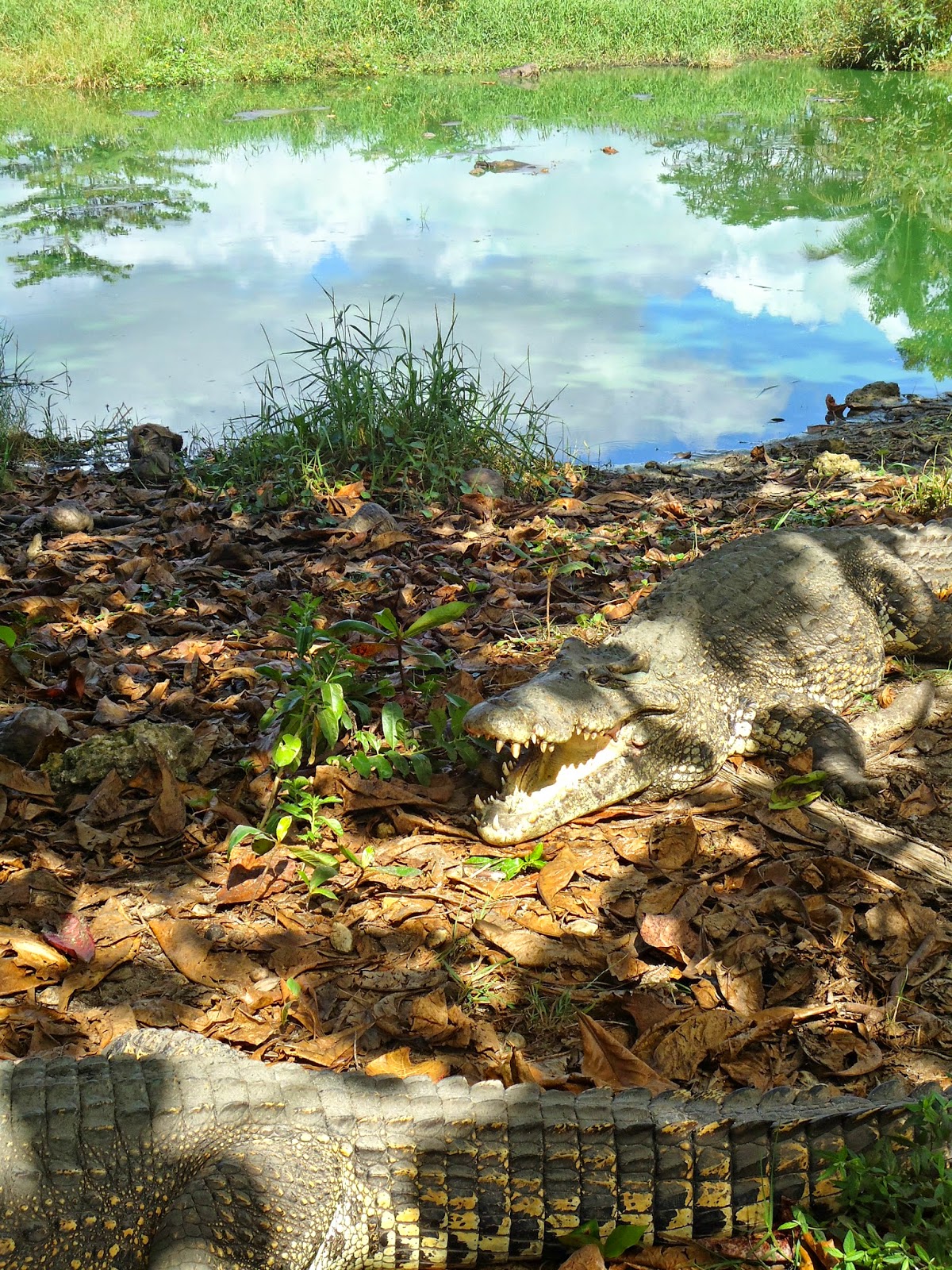 I am elated and think the day can't possibly get any better...oh, but it does. Boca de Guama is a sprawling swampland that is fenced with a walkway all around. This gives tourists the chance to stroll and hopefully catch a glimpse of a large crocodile. And we are not disappointed as there are many on the land and near the water's edge. Not too far down the path, stairs lead up to a viewing platform. From above, you can see about 30 crocodiles swarming to the shore for their afternoon feeding. An employee speaks to a group of tourists that have gathered to watch as he holds a long pole with a chunk of meat attached over the fence. Crocodiles take turns ripping at the meat as more join from the depths of the dark swamp. Tourists are given the chance to try the pole feeding and I overhear one person saying that the immense power of the beast could be felt on the line. The line-up to feed the crocodiles is endless so I decide that watching from above is just as satisfying. It's interesting to see how each crocodile takes a turn and removes himself from the swarm whether he succeeds in getting a piece of food or not. The crowd cheers as a large male crocodile holds the meat in his jaws and tumbles with it, breaking the meat free from the pole. 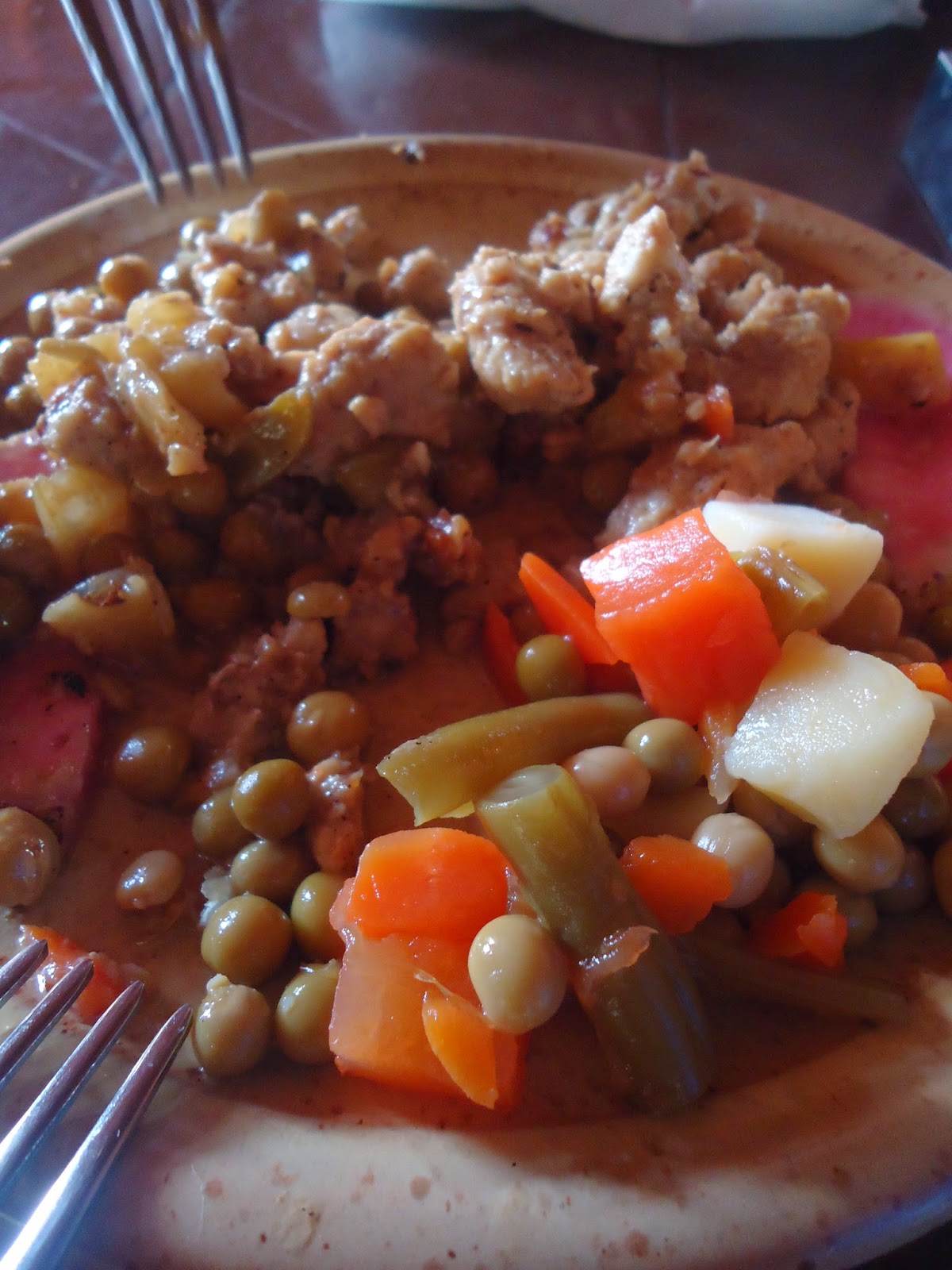 We continue our journey along the pathway, seeing crocodiles laying in the shade, still as statues. One opens his enormous mouth and hisses as we walk past. The sun becomes hotter as we travel around the farm and a break from its intensity is becoming a necessity. A hut is visible up ahead and there is a band playing upbeat music. It turns out to be a restaurant where we order drinks, relax in the shade and play with the dogs that wander around waiting for table scraps. I notice a small sign on the counter that says "cocodrilo grille 10.00 cuc". Grilled crocodile meat was on the menu? I just had to try it. I placed the order and asked the cook if I could watch the preparations. He motioned for me to follow him to the grill area where he produced a small piece of tenderloin, similar to pork tenderloin. He cut it into cubes, battered it and put it on the grill. It seemed like an easy process but I was still curious about how it would actually taste. The crocodile meat was served with potatoes, carrots and peas...and it was delicious. It tasted a lot like pork. Even my 3 year old daughter loved it..which I was surprised because she doesn't eat too much in terms of variety. The cook told us, in his broken English, that it was high in protein and contained little fat. Not surprising, considering that a crocodile is very muscular. However, I wondered if I was eating a crocodile that had recently died of natural causes or were they killing the animals just to make a buck? 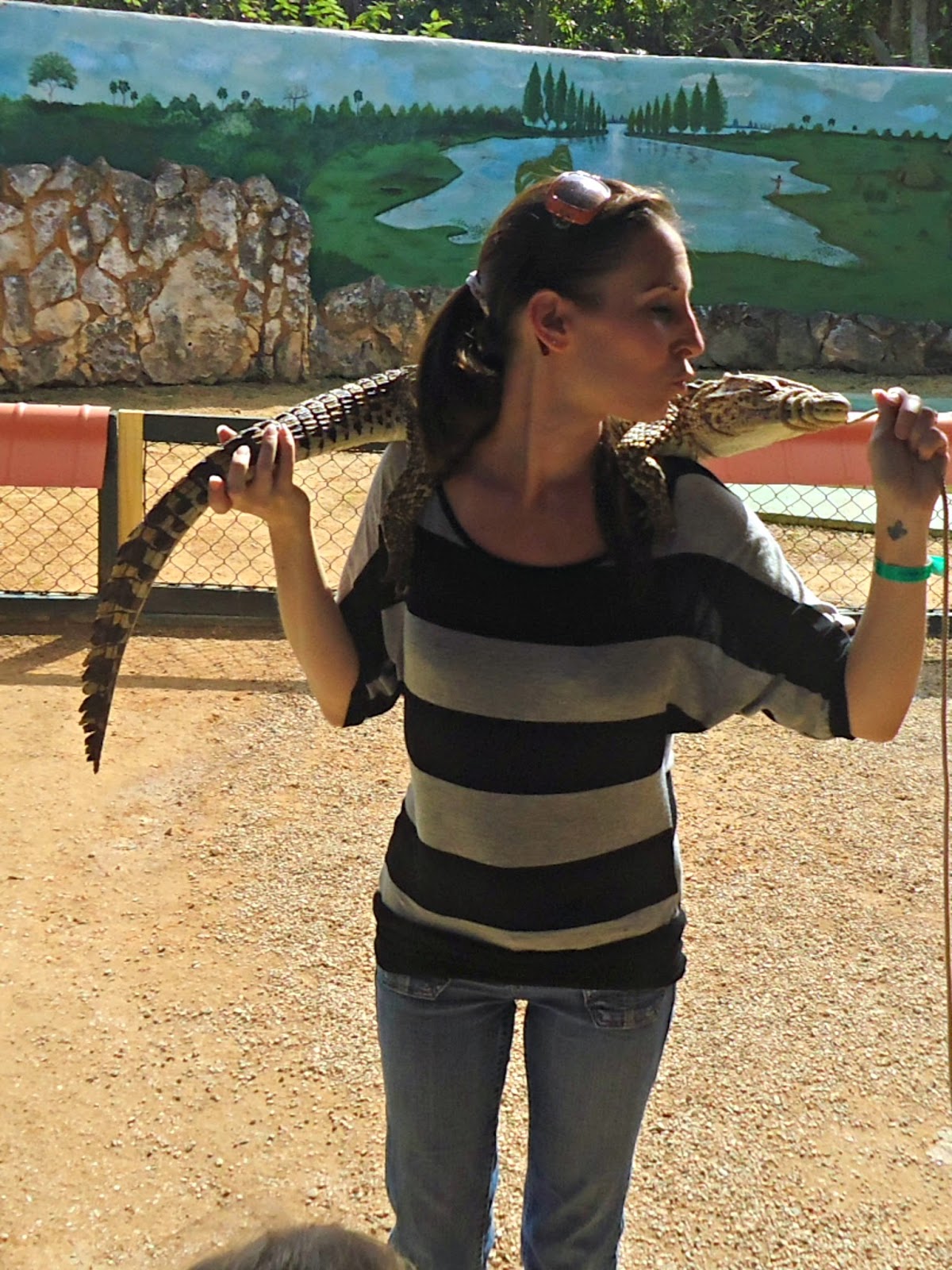 About to leave the crocodile farm, I needed a souvenir to commemorate the experience so I bought a big crocodile tooth hanging on a necklace from one of the vendors for 15 dollars. And before we exited the farm, we made a donation so that they could continue to breed the amazing creatures that are currently close to extinction in the wild.

On the drive back to Varadero, I reflected on the visit to Boca de Guama as my daughter slept peacefully in the back seat. I could only hope that she took away great memories and a respect for the powerful crocodile.

Donna is not afraid to take the road less travelled and head off the beaten path. She has learned to seek adventure while totting around a toddler and always in high-heels. Donna is a unique traveller with a style all her own that sometimes results in mishaps and misadventures that can be shared and laughed about with friends and family for years to come.

Posted by Freddie Miranda at 00:30