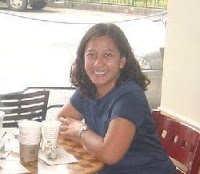 "Friendship is like Water: it seeks its own level"

We are lucky to have Adelaida (popularly known as Aida) as part of our Featured Travellers.  A busy woman as she is but still find time for local and international travel.  She had been to Asian countries like Hongkong, Singapore, Thailand, Malaysia, China, and Macau - and to European countries: Austria, Netherlands, Germany, France, Italy, and Vatican City.  As to her wishlist, she plans to visit Spain and Portugal in the near future.  Aida want to share some travel tips with our fellow travellers:  "Don't compare and don't convert.  Each place has its own character and I consider it disrespectful, particularly to its people, to compare one to another.  They can never be equal. One will stand out or one will fall short of the other.  Same is true for money matters.  The value of a currency varies from one country to another. Once you start converting a foreign price to your own home currency, either you'd end up buying a lot or none at all", she says.  Aida has some interesting information about her city, its culture and cuisine.  She wants to call
her story, "My Manila"

I was born and raised in a suburb of Manila which is home to the world famous (and feared) Balut.  My hometown, Pateros is a small municipality that was once a part of the province of Rizal.  Probably due to its geographical location, Pateros along with 13 other municipalities and 4 cities formed part of the greater Metro Manila in the mid 70's.  But while all the other municipalities have all been upgraded into cities, Pateros has remained (and I believe will forever remain) a municipality. Well, I am not complaining, after all, we get to enjoy "cityhood" benefits without having to pay exorbitant real property tax.
To the outside world, it seems that there are only 2 words that easily come to mind to describe Manila: sunset and traffic (and not necessarily in that order).  Yes, Manila has one of the world's horrendous traffic owing to the assortment of transport options --- from the horse-driven carriage called Kalesa, the manually pedalled pedicab, to the motorized tricycle and the iconic colourful jeepney.  Add them to the flying buses, cars, cabs, vans and the more than a million commuters, you will really find yourself in a parking lot in the middle of its 12-lane highway.
No wonder a lot of people look at Manila only as a transit point, which is really a pity as there's a lot more to Manila than this chaos. I always say that the City of Manila has 3 C's waiting to be discovered --- Culture, Cuisine, and Chaos.  Well,we're done with the latter, so let's start exploring the others.....on foot.


Binondo:
It's known as the "wholesale" capital with the presence of Divisoria, a big textile market where your haggling skills (coupled with charm and intimidation) will be put to the test.  A purchase is considered a success if you were able to get an item at half the published price.  Aside from textile, Divisoria is also the cheapest source of clothes, novelty items, foodstuff, snack items, and other knick-knacks.  Just a caution though, dress down and don't bring valuables when you decide to go shopping here.  And avoid it like a plague during Christmas season (read: November to December).  Otherwise, you'll literally be moved from your spot by the throng of people.

Also, within Binondo is Manila's chinatown which is a foodie's delight.  From baked goodies to street food to lauriat, you'll find them here.  In fact, one tour that is gaining popularity is a walking culinary tour of Chinatown.  But if you want to do it on your own, look for Eng Bee Tin.  It's a purple-themed Chinese bakery that sells hopia, tikoy, mooncake, among others.  And when I say purple-themed, it's because the entire store including shelves, chairs, tables, staff uniforms are colour purple. It even sells ube (purple yam) flavoured hopia.

Intramuros:
It is Manila's version of Berlin Wall.  But unlike the latter, nobody dare remove Intramuros' walls.  Fact is, a commission was created to preserve and restore the walls including the buildings within the walls.  And when a local is asked for must see's in the city, Intramuros is the top-of-mind reply.
The walls is best seen on foot (though there are kalesa's for hire) in the afternoon.  Start at the Manila Cathedral, the country's seat of Catholic religion.  Then on to San Agustin Church and Father Blanco's Garden.  Across the cobblestone street is Casa Manila museum.  Down the road are old buildings that house government offices, universities and fine-dining restaurants. Don't be surprised too when you come face-to-face with life-size statues as you round a corner.  This is part of the plans to re-enact the walls' rich and tumultuous past. And as you round up your tour, crossover to Fort Santiago, once served as a prison of our national hero, Dr. Jose Rizal.  Honestly, I have been to Intramuros several times, but have not totally explored it as a half day was not enough.

Rizal Park:
Just outside Intramuros is an open park called Rizal Park, named after the national hero as this is where he was executed by firing squad.  A monument was erected in his honor and close to it is the "zero" kilometre marker where all distance measurements in the entire archipelago start.  At the west end of the park is the Quirino Grandstand where official parades were used to be held.

Manila Bay Sunset:
A trip to Manila will not be complete without seeing the famous Manila Bay sunset.  The reflection of the setting sun on the waters of Manila Bay is really soothing.  (Just ignore the smell of garbage and the nude kids swimming on the bay).

Manila is a melting pot, not only of people but, of food as well.  While Manila can’t lay claim to a specific dish, there’s a lot of must-eat food in the city which were mostly a “synergy” of Chinese, Spanish, and Malay cuisine.   But for this blog, I’ll name the ones that will challenge your palate and your “heart”.

Street Foods:
Can you imagine yourself eating betamax, adidas, helmet, IUD?  How about those tongue-twisting Tokneneng and Kwek-kwek?  Well these “brand” names are products of Filipino ingenuity.  Betamax is grilled pig’s blood cut into small squares; Adidas is grilled chicken feet; Helmet is grilled chicken head; IUD is grilled chicken intestines; Tokneneng and Kwek-kwek are both breaded eggs, the difference lies on the size --- tokneneng is breaded quail egg while kwek-kwek is breaded chicken egg.  Of course, there are the more tamed ones like fishballs, squidballs, shark’s fin.  And don’t forget the formidable Balut – boiled duck’s embryo.  A trip to the Philippines won’t be complete without trying this delicacy.

Dessert:
As you may find out, Filipinos have a sweet tooth and a meal is not complete without a sweet dessert. There’s the dirty ice cream.  Not much difference from your regular ice cream except it is sold by a “sorbetero” (food loose ice cream vendor) pushing his cart.   It comes in various flavours and colours --- violet for ube, yellow for mango or cheese, green for avocado, brown for chocolate; name it, the sorbetero has it.  Other  popular desserts are Ube Halaya (purple yam) and Leche Flan (custard cake).
Snacks:
And Filipinos love to eat, almost 5 times a day excluding midnight snack. The year-round popular “merienda” is Halo-Halo.  It is shaved ice with milk topped with various nuts, preserved fruits, halaya, leche flan and a scoop of ice cream.  Then there’s Banana Cue (fried banana), Camote Cue (fried sweet potato), Turon (fried banana wrapped in lumpia wrapper), Buchi (deep fried dough with mungbean filling).

The list can go on and on… you really have to come to Manila to experience this gastronomic treat!

Posted by Freddie Miranda at 19:59