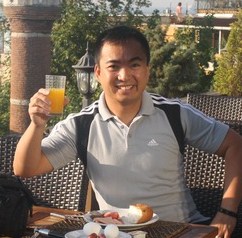 "When travelling, I do not dress to impress, but dress to be comfortable but still look good in pictures"

In spite of his busy schedule as a physician, Norman always has the time to wander around the globe.  He has, so far made it to more than 50 countries and still counting.

He's been to North America, Central America, Africa, Europe, Asia, Oceania, and the Middle East.  Norman started travelling on his own when he was 16 years old, with a solo trip to Hongkong from the Philippines where he was living with his grandfather.  During his late teens, he decided to visit his parents and sisters who were living in the U.S.A.  From then on, he travelled back and forth between the States and the Philippines every year until he finished Medicine at a university in the Philippines.

Norman got married before he started medical residency in the USA and travelled with his wife around Asia and Australia before having their kids.  He finally decided to settle in Arizona after specializing in Anaesthesiology and started planning on a family.

He is lucky to have twins and got passports quickly for the twin babies (a boy and a girl).  The couple bring the twins to at least one foreign country ever since and at the same time continue to go on solo travel expeditions around the world.
In one of his travels, Norman saw the movie "Jumper" where the main character goes from one country to another by "teleporting" and so when he joined Virtual Tourist travel site, he started using his most famous username "JumpingNorman".  At the early stage of his membership with the travel site, he became Rookie# 1 and have decided to collect Jumping pictures.  His original idea won him the Most Unique Page for VT in 2010.

His advice to you fellow travellers is to always be aware of your surroundings and travel lightly. He prefer travelling by airplane, and go around the destination using subways and taxis. He will continue travelling and eyeing the following countries for his next journey; New Zealand, Israel, Croatia, Morocco, and Madagascar.


When asked why he chose to live in Phoenix, he started telling his life story......

"I was looking for a place to settle in where it would snow the least, I would earn the most and I would have a beautiful suburban house close to a major metropolis with a busy airport --- my choices included Las Vegas, my original hometown of San Jose in California, San Diego also in California, and finally, I chose a job in Phoenix.

Although our summers can be painfully hot, we enjoy living in this place which is 4-5 hours from something (San Diego, Los Angeles, Las Vegas, and even Mexico are easily reachable by car).  The only regret is not having a beach close by --- and so now, that is what we look forward to --- seeing the beaches during our travels!

We are close to the Grand Canyon though and I have probably visited the canyon at least 50 times.  It is always fun to be close to this natural wonder.....

The longer I live here, the more I realize there is so much to see close to home.  Phoenix, Scottsdale, Glendale, and Peoria may not be too tourist friendly because of limited public transportation --- but the off-the-beaten-path adventures are unlimited.

From visiting ruins left by the Sinaguan Indians (Tuzigoot Monument) to Hot-Air balooning --- from the slippery rocks of Sedona's Slide Rock State Park to the eerie Montezuma Well ..... from the huge Saguaro Park of Tucson to the Safari experience at Out of Africa in Camp Verde...and the list goes on and on and on....

It is always nice to find out (and be surprised) that there's something close to home that you have never been to .... that's what Phoenix is for me.

You have to visit the Hole in the mountain at Papago Park.  Wow, this place just beside the Phoenix Zoo is just amazing.  It is a big hole in the middle of a little mountain that you can climb easily and be up there in 5 minutes.  You will see planes going in and out of the Sky Harbor Airport, the many palm trees around the area of the Phoenix Zoo.  Best of all, going up to this hole is....free.  It is weird that sometimes people who have gone a lot of times to the zoo have not even up to this hole.

I am known as JumpingNorman broadcasting ("jumping") from Arizona.  A crazy guy who loves to jump and collect jumping pictures.  So, what are you waiting for, do jump, jump, jump on your travels. Let's Jump for Joy!  Be a part of my gallery of jumpers all over the world."

Norman is a humble person, down-to-earth, I would say.  To him, travelling the world is not a competition --- it's a journey!  For more interesting stories of his travelling spree, I am giving you a virtual tour to his destinations.

Watch for these blogs!
They all have been travelling for many years and I can guarantee that all of them have travel tips that all of us can learn and benefit from.  I have to thank all other fellow travellers who have responded to my invite.  I will definitely publish your stories as soon as I have completed the details.
Posted by Freddie Miranda at 16:58