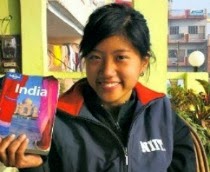 "Travelling awakens the dreamers, thinkers and believers in us"

Phebe is a talented travel blogger and writer from Singapore. She writes her experiences in her travel blog filled with tips and anecdotes of her "career of travelling", which began at a tender age of 19.

Despite having been to many top destinations, India continues to remain as Phebe's favourite place. She has a bad sense of direction but continues to travel; sometimes alone because of her quirky habits and intensely inquisitive mind.

Phebe feels that it used to be discovering a new place that motivates her to travel. Now, she thinks that some parts are about reminiscing the happy times she had there.  "Always ask yourself what makes you want to travel. Quite interestingly, it's mostly not because of the destination", she says.

When asked how important budget and planning is for a trip and how she manages to cut cost on each trip, her answers are very helpful, and I quote, "Planning in advance helps to negate unnecessary costs. That being said, it is advisable not to stick to too tight a budget. I've learnt that after some time it would be wise to spend on the best the destination has to offer".

Phebe has many tips and advices when it comes to travelling. "You don't have to have a great sense of direction to travel. I personally don't, have gotten lost very often but was always able to find a way. Common sense is most important", she added.

I, myself, is very excited to hear what Phebe has to say about her travel experiences. I do not want you to wait any longer, so, here it is .....

* * * * *
My first travel journey began at a young age when I went to India to work/study for six months. Before I left, I flipped through the guidebooks with stunningly beautiful pictures of India. I wondered if I'd even had the chance to see them with my very own eyes.


And I did. Though I must admit, India can be very hard on a new traveller. During my six months there, I came down with not one, but two bouts of stomach flu, which saw me vomiting non-stop, and not being able to digest much food. Thankfully I recovered.

It can also be quite challenging to travel in India alone as a solo female traveller. Instances of eve-teasing were not uncommon, so were the several times I felt a hand up my butt. I was quite sure it could not have been an accident, but was never able to catch the culprit. Then I realized, that surviving in India required one to be firm, furious and friendly at the same time. Firm when the Rickshaw-walla attempts to overcharge you, furious when someone tries to take advantage of you, and friendly at the right time because India is essentially made up of a majority of kind-hearted and lovely people.

And I can wax lyrical about India because I have spent so much time interacting with the people there. You can say that I took the time to understand them, and so did they try to understand me. And that sparked off my determination to travel to other places, and learn about the people and their stories there.

It's not easy. During my other trips to Myanmar or Indonesia, meeting and interacting with locals is usually on a transactional basis. You don't really get to hear their stories. But there are snippets. About a Burmese boy who wanted to know more about the world, and about me writing stories about how to negotiate volcanic terrain near the explosive Mount Bromo.

And quite interestingly, travelling has changed me inwardly, on the way I perceived my country, Singapore. There are simple things that I begin to appreciate about Singapore when I returned, such as the smooth, non-bumpy roads, the street lamps that light the way home at night, and mostly, the sense of security. It's a strange feeling when foreigners come up to tell you that you're living in one of the best countries in Asia, and you go, ‘Really?’

‘Should I travel to Singapore?’ some may ask. After all, it's a tiny little island with sparkly lights, booming with skyscrapers and shopping centres. Albeit with some rather unexpressionless people staring at their phones on the MRT. Do pardon us. We had a long day at work. And like in most countries, people only tend to open up after several minutes of conversation. You'd realise that our kiasu-ness (competitiveness, scared to lose type of mentality) is actually quite practical and endearing, from the way we reserve seats at the hawker centre with a packet of tissue.

Thought I'd include five lesser known hideouts should you drop by Singapore one day.

Posted by Freddie Miranda at 13:32